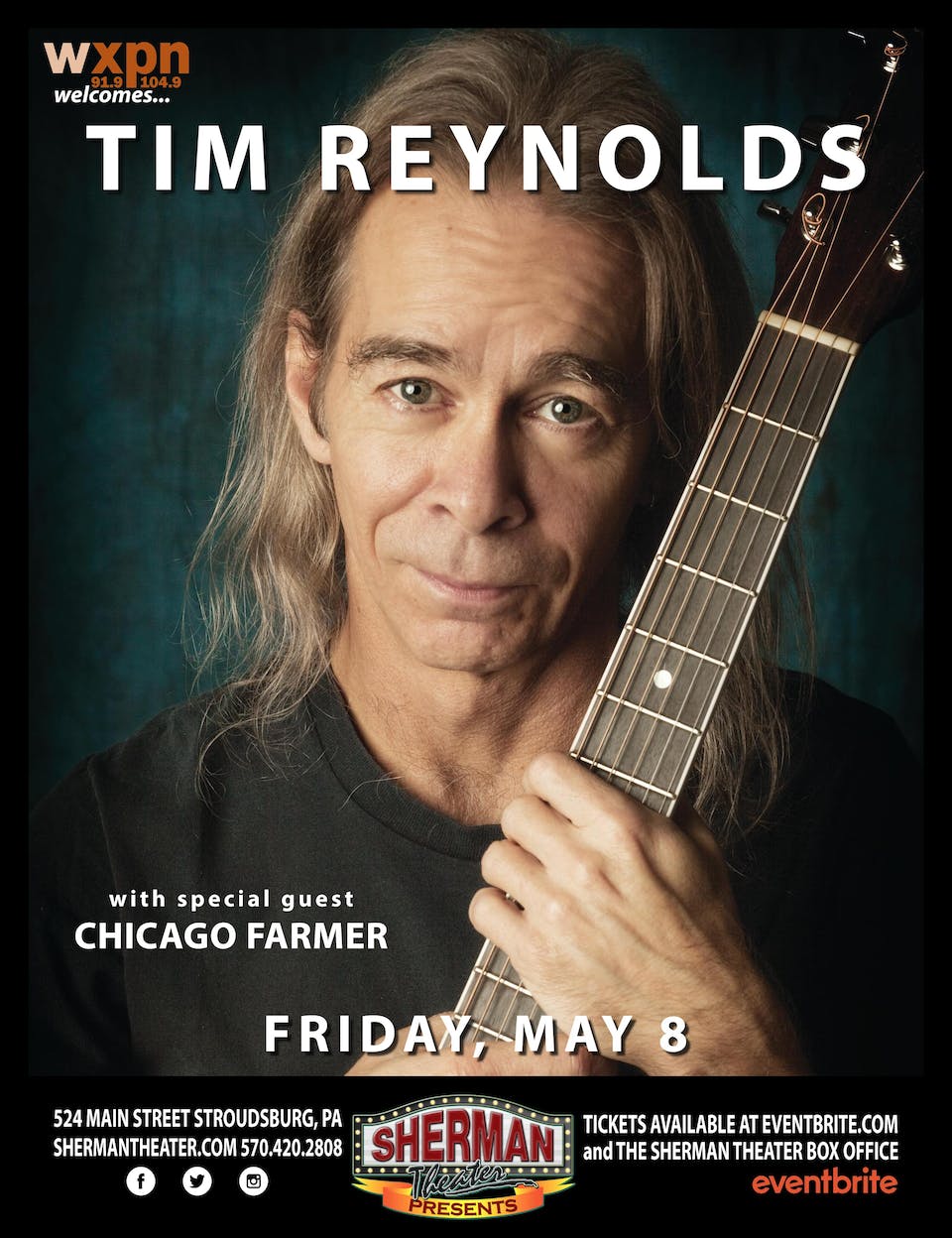 With a career spanning almost forty years, guitarist and sonic innovator Tim Reynolds is best known for his seemingly effortless guitar virtuosity, his masterful command of melody and timing, and for his uncanny ability to improvise on any instrument he touches. He’s explored almost every musical style, from rock, jazz and blues to classical and reggae, and his wide-ranging talent is evident each time he picks up his acoustic or electric guitar. Technically brilliant, yet emotionally honest, Reynolds’ music is inspired and authentic.

Tim Reynolds was born 15 December 1957 in Wiesbaden, Germany, to devoutly religious military parents. He had a peripatetic childhood, moving from Alaska and throughout much of the Bible-belt Midwest, eventually settling in St. Louis, MO. He started playing the piano at age eight, but then quickly progressed to playing the acoustic guitar and electric bass guitar in the local church gospel band during his teens. During this time he was also secretly experimenting and riffing with forbidden rock, funk, and soul. Upon graduating from high school, Reynolds left the constraints of his conservative upbringing and eventually moved to Charlottesville, VA, where he added psychedelic and progressive rock to his burgeoning repertoire of music.

It was in the mid 1980s that Reynolds founded his breakthrough electric power trio, TR3 (Tim Reynolds Trio), known for their fusion of funk, rock, and jazz. He toured with TR3 during the 1980s and 1990s, using a rotating cast of musicians. It was at this time he met and befriended Dave Matthews and their ongoing musical collaboration began. He eventually relocated to Santa Fe, NM, to pursue a solo acoustic career. He spent the 1990s and 2000s on the road as a solo guitar wizard playing for packed houses and to crowds who quickly determined that he is one of the most talented and thoughtful musicians on the circuit today. Tim continues to surprise and delight his fans with rare solo acoustic performances throughout the country.

After a number of years in New Mexico, Reynolds moved back to the East Coast to the Outer Banks of North Carolina. After a chance meeting with two talented musicians, bass player Mick Vaughn and drummer Dan Martier, a few rehearsals later, and several stealth appearances throughout North Carolina, Reynolds decided to resurrect the electric TR3. TR3 has been touring since 2007 and have released a number of CDs. Their latest CD and first major label release, “Like Some Kind of Alien Invasion,” came out in 2014.

A two time Grammy nominee, Reynolds is currently lead guitarist for the Dave Matthews Band and performs as one-half of the acoustic Dave Matthews-Tim Reynolds duo. Tim’s longtime friend and collaborator, Matthews says, “I’m dying to go on the road with Tim just the two of us again. I love playing with Tim because I think he’s the greatest guitar player I’ve ever met. He is so constantly spontaneous and really is so connected to what he’s doing when he plays. He makes everything have more room for the listener and more musical space. He’s a profound musical talent.”

The son of a small-town farming community, Cody Diekhoff logged plenty of highway and stage time under the name Chicago Farmer before settling in the city in 2003. Profoundly inspired by fellow Midwesterner John Prine, he’s a working-class folk musician to his core. His small-town roots, tilled with city streets mentality, are turning heads North and South of I-80.

“I love the energy, music, and creativity of Chicago, but at the same time, the roots and hard work of my small town,” he shares. Growing up in Delavan, Illinois, with a population less than 2,000, Diekhoff’s grandparents were farmers, and their values have always provided the baseline of his songs.

He writes music for “the kind of people that come to my shows. Whether in Chicago or Delavan, everyone has a story, and everyone puts in a long day and works hard the same way,” he says. “My generation may have been labeled as slackers, but I don’t know anyone who doesn’t work hard - many people I know put in 50-60 hours a week and 12-hour days. That’s what keeps me playing. I don’t like anyone to be left out; my music is for everyone in big and very small towns.”

He listened to punk rock and grunge as a kid before discovering a friend’s dad playing Hank Williams, and it was a revelation. Prine and Guthrie quickly followed. The name Chicago Farmer was originally for a band, but the utilitarian life of driving alone from bar to bar, city to city - to make a direct connection to his audience and listener, took a deeper hold.

“You can smell the dirt in the fields, hear the wind as it blows across the plains, and see the people that Chicago Farmer sings about. Each track captures a moment in time, whether for a person or a particular place. Imagine if a John Steinbeck short story had been written as a song, and this will give you a fairly good idea as to what Chicago Farmer accomplishes on his albums.”