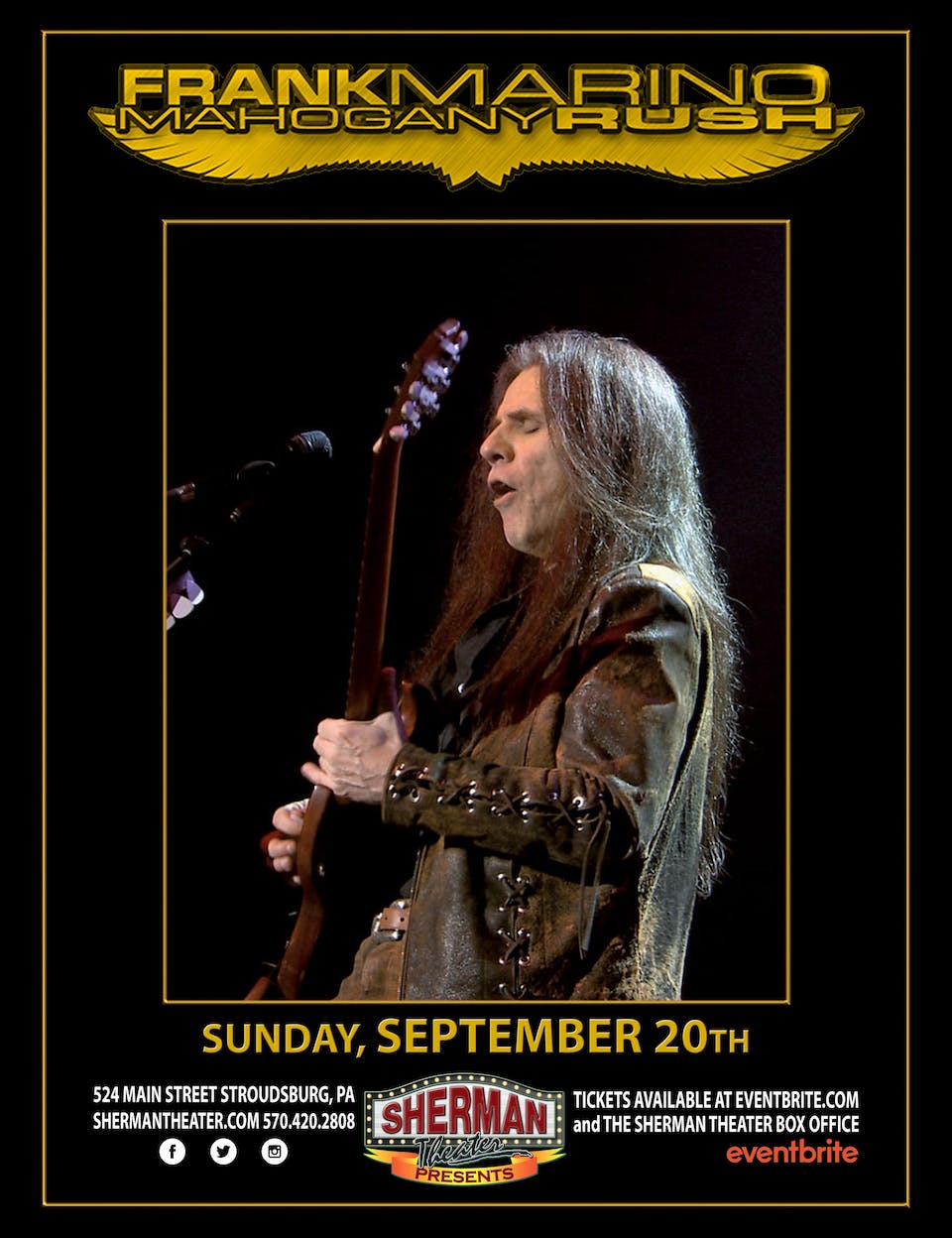 A Statement from Frank Marino regarding the 2020 Tour Dates:“Because of the current situation with respect to public health, and the desire by so many to limit the possibility of further interaction for a little while, we've decided to postpone our upcoming tour until some time after Labor Day (September/October).

The promoters and venues have been very helpful in setting things up so that we will essentially be going to most, if not all, of the same places. They have assured me that all tickets currently being held will be honored should you wish to hold on to them. Of course, I'm hoping that many will. They have also asked me to add extra dates in some of those cities because they were sold out and they wanted to give many others, who had tried to get tickets but couldn't, the ability to go to the show. Under the previous tour plan we were not able to add shows due to scheduling.

All the new dates will be published within a very short while. Some are already done, and I expect that the list will expand over the coming days.

In making this decision, I also considered that I had received quite a few emails from people in other countries who had been planning to attend some of these shows. Obviously they would have had a very hard time doing that during the present situation.

One other thing that concerned me was that, as most of you know, I really like to meet people after a show and chat a bit, when possible. This would have been certainly not possible under the circumstances. So I'm hoping that, by the fall, we will have all come out of this without needing to worry about such things.

I sincerely hope that all of you keep well and I really hope we get to see you all when we resume.

Peace, and God Bless you all,

He was born Francesco Antonio Marino on November 20, 1954 in Montreal, Canada. Half Italian and half Arabic, Frank is one of five children and only has a 7th grade education that even included a short stint in military school. "Those years were the late sixties and everyone was into the hippie peace movement and we were so busy getting stoned that we certainly didn't want to attend school. All we did besides getting stoned was listen to Hendrix, The Doors, The Beatles and a few others as well as getting involved in movements such as peace, love, anti-war etc. Those were definitely the days, not like now where many young people seem to be into negativism and hate".

It was during those days that his experimentation with LSD would lead him to what was later to become the definition of his life. As a young person doing far too much acid, he couldn't really understand when it finally caught up with him and gave him such an incredibly vivid experience that was so overwhelming, that it landed him in the hospital. "This experience became the basis of everything that I was to do in music, including the name Mahogany Rush, which was a description I would use to describe a certain sensation that I was having on the trip. The artwork on the albums, Child of the Novelty and Strange Universe are an artist's rendition of my trip as told by me to the artist, Ivan Schwartz, who has since passed away".

Since this early drug experience later became known to the press that covered his career, and since he played much in the style of Jimi Hendrix who had recently died, these sensationalists created stories that to this very day Frank has tried immensely and unsuccessfully to dismiss. "The most often heard story is that I took an overdose and woke up from a coma in the hospital and somehow became the spirit of Hendrix, or that I met this spirit and it entered me, endowing me with this amazing ability to play a guitar and magically know everything about it. Later on the story changed into a version that said I was in a car accident, died and came back as Jimi Hendrix in my body. They never ask me the truth and when I told them, they wouldn't listen. The short truth about it is that I learned how to play guitar while recuperating from my trip. The guitar became a soothing help for me because of my great fear of letting my mind wander back into the trip if I wasn't occupied and besides it was the only thing in the hospital relaxation room. I never even thought about the guitar before since I played the drums quite well anyway. I had this trip while Hendrix was still alive and began to play his music because it matched perfectly to what I was going through at the time".

It was only a few short years later after many different band members, that Frank Marino recorded his first album. "In the early years I played in a church and even on a float in a parade. I did mostly cover songs by The Doors, Hendrix, Pink Floyd, Cream, Johnny Winter, The Beatles and even The Grateful Dead as well as a few originals that I had written".

Frank Marino's music never reached the mainstream of popularity, but has had a devoted fan base that has grown over the years. Being sober now for over 35 years, he still plays with the enthusiasm that he's always had. Frank is into his music and doesn't really care for the business side of it and has always produced his own albums as well as writing and arranging all of the music. If you ever get a chance to see him play live, don't pass it up. I have been a devoted fan for 30 years and welcome any newcomers with open arms.