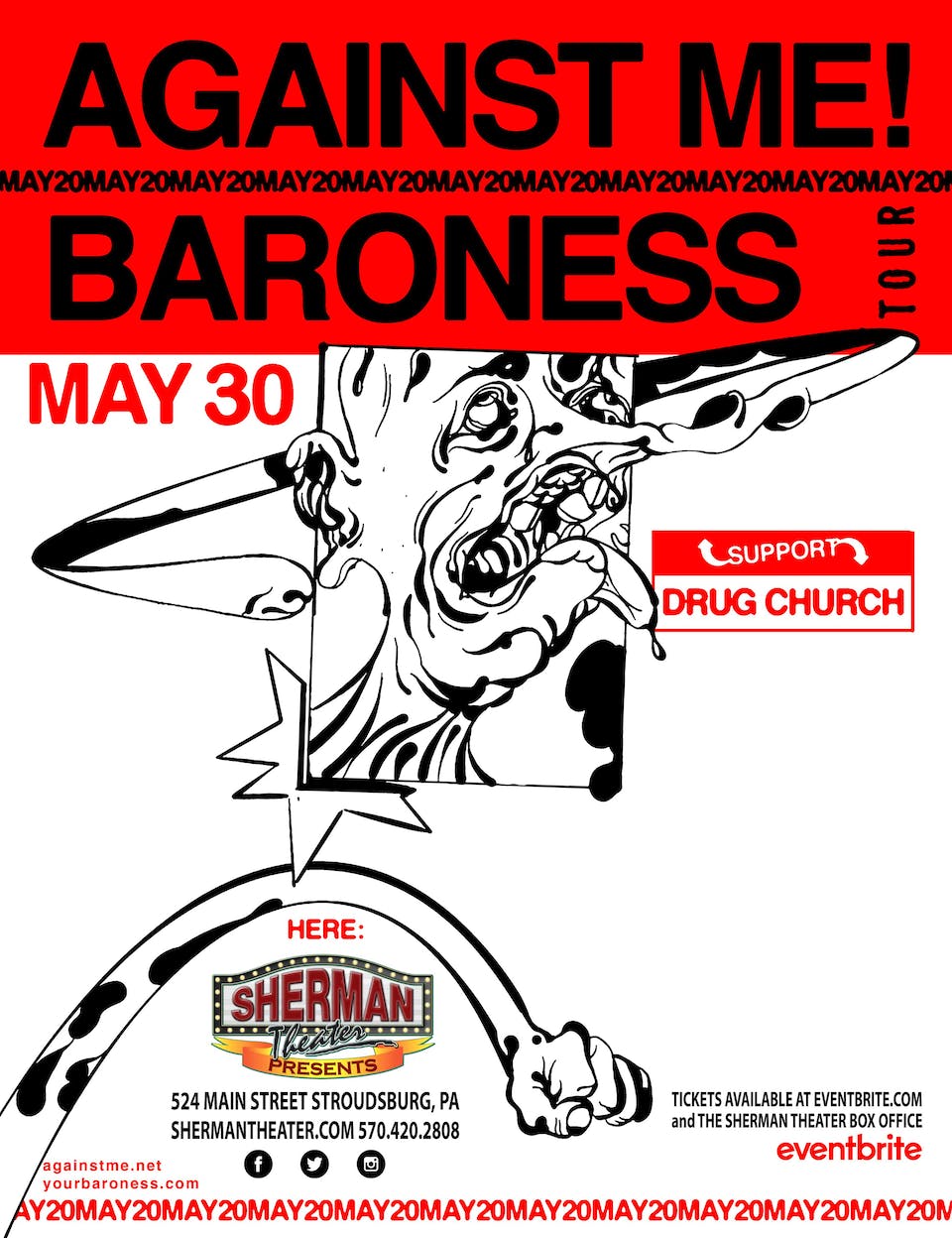 Presented by Sherman Theater in Association with SLP Concerts

iCal
Google
Come See Against Me! and Baroness with special guests Drug Church at the Sherman Theater!

To pirate the title of one of their early songs (and still a set-list staple), Against Me! is a band that laughs at danger and breaks all the rules.

Fronted by Laura Jane Grace, AM!’s much-anticipated, Transgender Dysphoria Blues released in January 2014. The title of their sixth album offers a direct nod to news that shocked fans and shook up the rock world when it was dropped—Grace, a transitioning transgender person who revealed her story in the May 12, 2012 issue of Rolling Stone (readers curious to learn more about the transition can check out Laura Jane’s “My First Year as a Woman” journal online in Cosmopolitan).

Against Me! began as an anarchist solo act in Gainesville, Florida in 1997. After transforming into a traditional four-piece a few years later with the crucial addition of guitarist James Bowman, they quickly became a driving force in the punk scene—despite facing an abundance of unsolicited danger.

While emerging unscathed from two separate road tour spinouts and, more recently, enduring a flying mic stand which cost Grace her front teeth, Against Me! have played in all 50 states and 29 countries, cranking out an average of 200 sweat-drenched, fist-pumping, shout-a-long live gigs per year over the past decade. Their musicruns the gamut from thrashing to anthemic to intimate, with Grace’s pointed lyrics and powerhouse voice blending vitriol and vulnerability like few other performers.

With a healthy dose of folk and even some old-school country in their sound, the band’s first three indie full-lengths (2002’s Against Me! is Reinventing Axl Rose, 2003’s As The Eternal Cowboy and 2005’s Searching For A Former Clarity) earned them a rabid and steadily growing following.

Their 2007 major label debut, New Wave, was produced by Butch Vig (Nirvana, Garbage, Green Day) and named "Album of the Year" by SPIN Magazine. The early-Springsteen-esque raver “Thrash Unreal” reached #11 on the Modern Rock charts, and in addition to a headlining tour, the band also supported the Foo Fighters on the road in 2008.

After 2010’s White Crosses (which peaked at #34 on the Billboard charts), the band parted ways with Sire. It was at this time that Grace went through an intense soul-searching phase and eventually decided to transition, going public with the gender dysphoria she had been dealing with since childhood.

As might be expected with such an intensely personal project, Grace took complete creative control of Transgender Dysphoria Blues. She not only assumed producing reins for the first time but even built the Florida studio, Total Treble, where the demos were recorded. Then—more danger struck. During a tornado, a tree crashed through the roof of the studio.

After that mishap, the full record was recorded without further incident at three separate facilities: Dave Grohl’s 606 Studios in Northridge, California; Motor Studios in San Francisco; and Earth Sounds in Valdosta, GA.

Which is certainly not to say Transgender Dysphoria Blues is a “safe” record. Grace’s soul is brutally laid bare here in this riveting 10-song collection. While four of the tracks directly address the unique anxieties and fears inherent with being transgender, they still crackle with universal resonance.

Joining Grace and Bowman in the band are a brand-new rhythm section.

Inge Johannson (formerly of Sweden’s International Noise Conspiracy, and a surefire winner of the “Scandinavian Ramones Lookalike Contest,” if one is ever held) has come aboard as the full-time bassist.

The new drummer is punk stalwart Atom Willard, who launched his career as a teenager with Rocket From the Crypt and has had stints with the Offspring, Angels & Airwaves, and Social Distortion. Willard replaced Jay Weinberg, who’d toured with the band since late 2010.

In 2014, Grace served as Music Director for MTV's Rebel Music, a series of documentary films about youth, music and global social change, focused on youth protest movements in the most challenging and turbulent parts of the world. Additionally, she is a contributing writer to Noisey where she writes an advice column titled Mandatory Happiness and, alongside the legendary Joan Jett, recently loaned her support for Miley Cyrus' "Happy Hippie Foundation," a non-profit whose mission is to rally young people to fight injustice facing homeless youth, LGBT youth and other vulnerable populations.

Baroness is an American heavy metal band from Savannah, Georgia whose original members grew up together in Lexington, Virginia.

In an April 2017 interview in Teamrock, lead vocalist/guitarist John Baizley stated that they had begun writing material for their fifth studio album. Baizley stated: "We’ve started writing a few tunes that we’re working on. The really cool thing now is that [newest members] Sebastian and Nick have been in the band long enough that they understand what we do."

In March of 2019, the band began teasing the release of a new album, entitled Gold & Grey. Three days later on March 12, they released the album art on their social media accounts stating, "This painting was born from a deeply personal reflection on the past 12 years of this band’s history, and will stand as the 6th and final piece in our chromatically-themed records."

Gold & Grey was released to overwhelmingly positive reviews, achieving a score of 94 on metacritic with 9 reviews. Critics praised the album's artistry, the instrumental musicianship, and the use of vocal harmonies as well as stylist breadth that builds upon elements from the band's past works while also incorporating new stylistic elements.